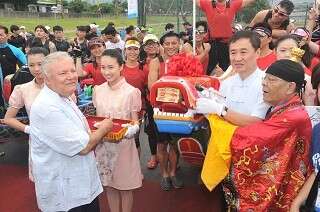 The eye-dotting ceremony for dragon boats taking part in the upcoming 2016 Taipei International Dragon Boat Festival took place at the Qu Yuan Temple in Beitou District’s Zhoumei Borough on May 21.

Following the eye-dotting ritual at the temple, the deputy mayor joined members from six dragon boat teams, including Team-max, “Boat of Love,” Taipei Xiahai City God Temple, and Shezidao dragon boat team, in a procession accompanying the deity’s palanquin down to Zhoumei Wharf.

After the performance by renowned Jyou-tian Folk Drum and Arts Group at the wharf, the deputy mayor and foreign dignitaries filled in the ‘eyes’ on the dragon head for six dragon boats, praying for peace and prosperity for Taiwan.

The dragon boat races at Taipei Dragon Boat Festival is the largest of its kind in Asia, with 212 teams comprising over 5,000 participants taking part in the upcoming competition in June.