With the Chinese New Year holiday right around the corner, the Public Transportation Office (PTO) announced that local cabs will be charging a holiday surcharge for the period between February 7 and 16.

Starting midnight on Sunday, February 7, the additional holiday surcharge of NT$20 will be added automatically by the meter to the basic fare. The measure will last through 11:59 PM on Tuesday, February 16. For rides that span both the regular rate and holiday rate periods, the fare standard will be determined by the boarding time. 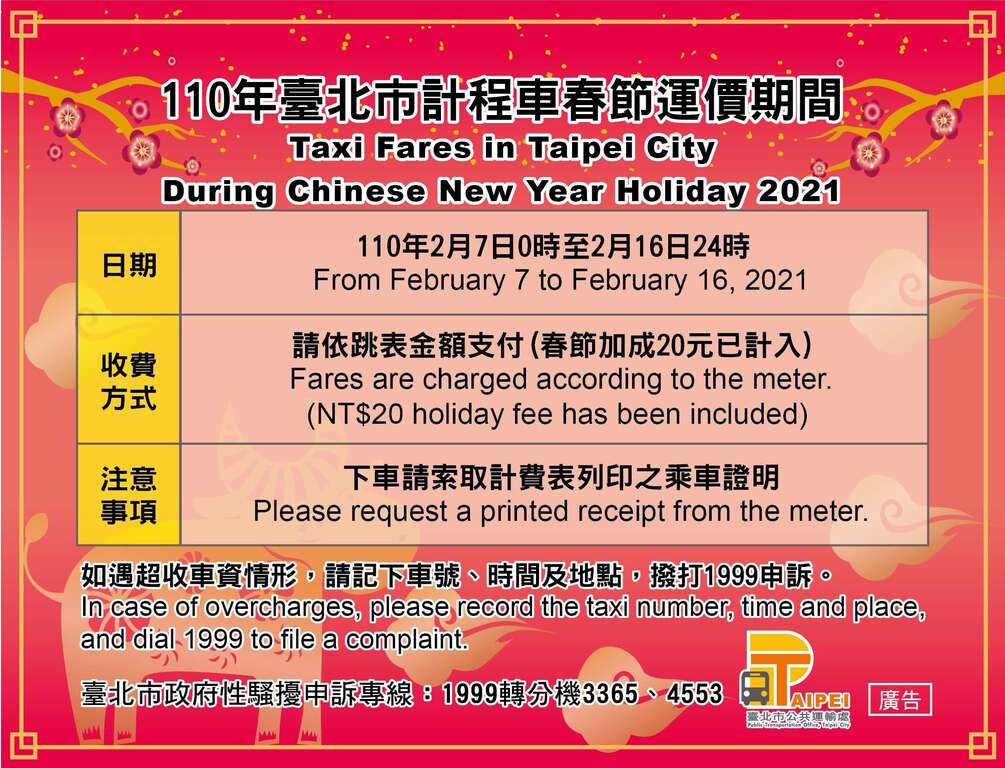 PTO reminds taxi drivers to switch on the internal “Chinese New Year Surcharge” function of the meters during the aforementioned period. Those who forget to activate the option must collect fares per the total displayed on the taxi meter.

The agency also reminds passengers to collect the receipt from the taxi driver before disembarking. If passengers notice events where cab driver refuses to provide service or overcharges for the ride, such incident should be reported to the police or the city government via calling the 1999 Citizens’ Hotline. Confirmed violations will be punished in accordance to the Highway Act and the Road Traffic Management and Penalty Act.

Given the frequent banquets and gatherings taking place during Chinese New Year, PTO encourages the public to take taxies to avoid the hazards of driving under influence.

For any questions regarding taxies, please call either the 1999 Citizens’ Hotline or TCPD Traffic Division (TEL:02-2375-2100)