Robin Ruizendaal, originally from the Netherlands, is a puppet theater expert based in Taipei.

Entering a narrow, historical building on Xining North Street, between Dihua Street and Dadaocheng Wharf (大稻埕碼頭), you step onto well worn, but still dark and polished, wood floor. To the left is an open space, a small, cluttered workshop where a puppet maker carries out his craft. A narrow wooden staircase leads to the exhibition areas of the Taiyuan Asian Puppet Theatre Museum (台原亞洲偶戲博物館). The adjacent Nadou Theatre (納豆劇場) comes alive with the sounds of children laughing and applauding. These are the stomping grounds of Dr. Robin Ruizendaal.

Ruizendaal serves as the director of the Taiyuan Asian Puppet Theatre Museum and artistic director of the Taiyuan Puppet Theatre Company (台原亞洲偶戲團), both based in Taipei. Originally from the Netherlands, this city has been his home for more than two decades. He fell in love with it on his first visit here in 1990 to carry out field studies for his doctoral dissertation. In 1993, after receiving his degree, he returned, determined to build a career and life here.

From Study to Lifelong Passion
What started out as something of a fluke has turned into a lifelong passion. In 1986, he was enrolled in a doctoral degree program in Chinese Studies at Leiden University in the Netherlands. As part of this program he was expected to spend time in China researching a specific topic. He already had an interest in drama and went to the library in search of relevant information and inspiration. “What I found was that puppet theater was everywhere,” he says, “I became fascinated with learning about traditional marionette theater and using it as a way to research Chinese culture.” While at Xiamen University, he saw his first traditional Chinese puppet show. He notes that, “After that, I followed four puppet theatre companies working in the countryside and interviewed four performers who were educated in the 1930s.” This shaped his dissertation, which focused on traditional marionette theater over a 60-year-period in southern China, mostly Fujian Province, with some fieldwork in Taiwan. Armed with expertise, Chinese and some Taiwanese language proficiency, as well as a love of Taipei, he settled here, continuing to follow his passion. In 2001, Ruizendaal, in collaboration with Dr. Paul C.F. Lin (林經甫), founder of the Taiyuan Arts and Culture Foundation (台原藝術文化基金會) and himself an avid traditional puppet collector, established a center to develop puppet theater exhibitions and performances. In November 2005, that center moved to its current location, two historical buildings side by side that, respectively, house the museum and the 100-seat multi-purpose Nadou
Theatre. Thinking back on these accomplishments, Ruizendaal says that he is truly grateful to Taiwan and Taipei for providing him with the opportunities to further his career in puppet theater. He adds that, “Taipei is the center of culture and development in Taiwan. It is the place to be.” On the first floor of the Taiyuan Asian Puppet Theatre Museum, a master puppet maker works in an open studio area. 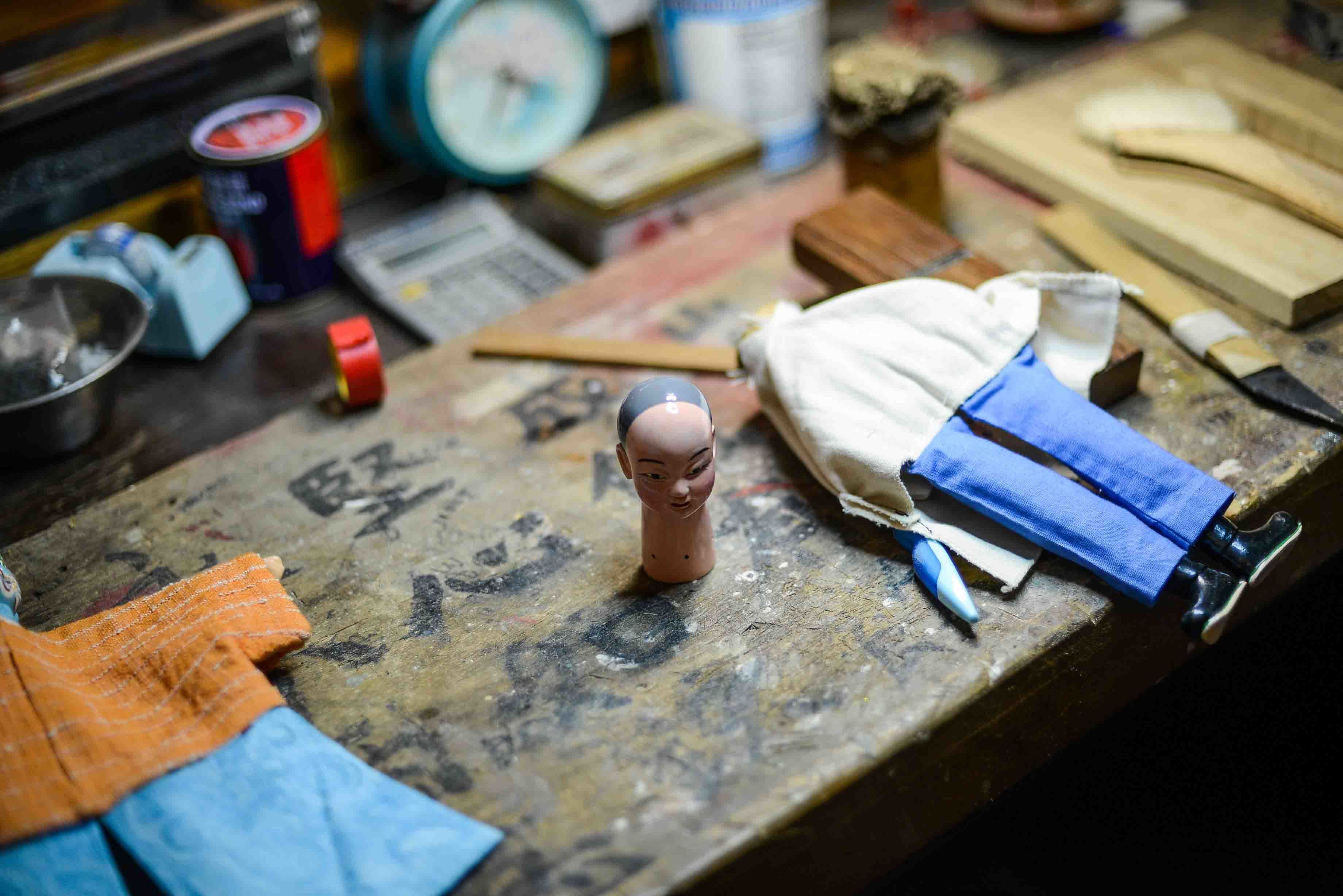 Components of puppets are ready to be assembled by the loving hands of a master puppet maker.


But, it is not only the culture that he loves about Taipei, as he rattles off a list of the city’s advantages. “There is good food, good weather, good nightlife. This city is alive 24 hours a day. It is an open society that is constantly changing for the better.” He also notes that there is much freedom, as well as high level of acceptance among residents of new trends and people from different backgrounds.

Willing Participant in the Revitalization of Dadaocheng
If there is one part of Taipei of which he is especially fond, it is Dadaocheng, where the museum and puppet theater are based. A century ago, this was a prosperous commercial riverside area. As such, it has long been home to traditional performing arts groups, such as puppet theater companies that stage shows at temples, entertaining the gods and the public. Ruizendaal notes that he planned his move to this area 18 years ago, as this is where the city and its culture originated.

He adds that he is very pleased with the revitalization efforts that have taken place in this area and proud to have been a part of them, but not just from the aspect of preserving and fostering Taiwanese puppetry. Since the beginning, the Taiyuan Arts and Culture Foundation has been involved in promoting Taiwanese culture and the history of this part of the city. One of the projects the foundation has participated in is the establishment of the Chinese New Year market along adjacent Dihua Street, which has become a popular shopping and tourist destination before this important holiday. Ruizendaal says that, “It’s great to see the positive transformation of this area.” He adds that, “Old shops, for example pharmacies and traditional shops, stay in this area and any holes are filled by quality shops run by people who are idealistic.” Housed in a historical building in Dadaocheng, the surroundings of the Taiyuan Asian Puppet Theatre Museum complement the displays. Robin Ruizendaal is passionate about his work in Asian puppet theater research, performance and exhibition planning.

One Person, Many Roles
Speaking of idealistic people, Ruizendaal notes that there is a full time puppet maker on staff at the museum. There is also a costume maker who serves as the museum’s head of conservation. “We all have four or five jobs,” he says with a chuckle. This seems like a perfect definition of passion. One of his many jobs is to curate two exhibitions per year, including those shown in the museum and that travel to other cities in Taiwan and abroad. The museum maintains a large collection, mostly of Asian puppets and objects related to Asian puppet traditions. In addition, fieldwork is continuously being carried out in Taiwan and throughout Asia. Thus, there is much material from which to draw. He notes that, in terms of exhibitions, he seeks to create a fun and exciting environment. “There needs to be a 3D experience. It has to be see-through, as if you are part of the performance or backstage crew.” He has broken through conventional museum display methods of objects behind glass, developing interactive and DIY activities. As exhibition visitors cross the spectrum from local schoolchildren to tourists and specialists from around the world, each exhibit incorporates multiple layers of knowledge from the basic to the expert. He explains that, “Each exhibition has to have a good academic base, but still needs to be accessible and interactive.”

In his position as artistic director of the Taiyuan Puppet Theatre Company he writes and directs many of the shows. To date, this company has performed over 30 different productions in over 50 countries, with some productions requiring two to three years of preparation, especially those geared toward adults. One upcoming example is a production of Carmen , based on the opera of the same name, to take place in Shanghai. Children’s shows require relatively less time and make up the bulk of the productions. In each of the company’s works, Ruizendaal strives to retain the unique features of Taiwanese puppetr y while incorporating modern elements and the latest international performance trends. Both Taiwanese and foreign actors and musicians can be involved, allowing for a diversity of subject matter, from local to international, as well as a diversity of languages from Mandarin and Taiwanese Hokkien to English and Italian.

With more than two decades of research and practical experience, Ruizendaal is a leading figure in Taiwan’s puppet theater circles, including academic ones. Thus, he has been instrumental in bringing scholars of puppet theater to Taipei. For example, in December of last year, he played a major role in organizing a Potehi (glove puppet theater) in Southeast Asia and Taiwan international conference (東南亞與台灣布袋戲國際研討會) at the Taipei National University of the Arts (國立台北藝術大學), with an accompanying exhibition at the museum. At the Taiyuan Asian Puppet Theatre Museum, a diversity of puppet traditions is introduced.

Optimistic About the Future
of a Traditional Art Form
Taiwanese puppet theater is a traditional art form, but is it a dying one? Ruizendaal does not think so and he is quick to state the reasons for his optimism. “The government has been very helpful in this respect. The Ministry of Education (教育部) has launched a puppet theater educational program. All elementary school students across the island are expected to watch a puppet theater performance.” He adds that preservation of puppet theater is important in maintaining Taiwanese identity. “It’s really part of Taiwanese culture.” With currently about 300 puppet theater companies operating in Taiwan it seems as if this art form is here to stay.

He notes that after World War II, puppet shows thrived. As television became popular and shows were created for this medium, puppet theater took off in the 1970s. More recently, its popularity has been ensured with the rise of the Cosplay subculture. Ruizendaal has found Taipei to be a place of opportunity, where people can follow their passion and succeed. It is a place to experience both modern trends and the preservation and revitalization of traditions, not just in puppet theater, but across a full spectrum of industries and the arts.