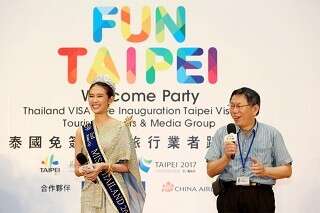 Mayor Ko Wen-je attended the “Fun Taipei: Welcome Party” event to welcome the first group of travel agents and media professionals from Thailand arriving in Taiwan under the new visa-waiver program on August 1.

In light of the new visa-waiver program for tourists from Thailand traveling to Taiwan effective August 1, the city government invited Thai travel agents, media, celebrities, and bloggers to visit Taipei as the first group to take advantage of the visa-waiver program. They will embark on a 4-day, 3-night visit on the island.

At the press conference, Mayor Ko welcomed the members of the group. He appeared on stage with the goodwill ambassador of the group Saowalak Jaisiritanya and performed the well-known song “The Moon Represents My Heart” in a duet of Chinese and Thai to promote Taipei tourism.

The mayor noted that Thailand is a major tourist attraction in Asia. However, he noted that Taiwan – especially Taipei – will become an important Asian tourist attraction as well. Taipei City Government listed the 10 ASEAN nations as important sources of tourists for the City. Information and Tourism Commissioner Chien Yu-yen led city staff to take part in tourism expos in Southeast Asia and invited top Thailand rock group Slot Machine to conduct a 1-day visit in Taipei.

Chien also headed a delegation comprising city officials and members from the Taipei Association of Travel Agents to the Executive Yuan to discuss the possibilities of relaxing visa requirements for ASEAN nations with the central government to attract more tourists.