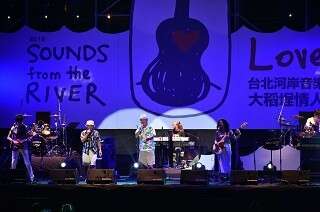 The 2016 Taipei Riverside Music Festival took place at the Dadaocheng wharf in the evening on August 6. The participants enjoyed a lively show featuring rock and electronic music, as well as 10 minutes of beautiful fireworks.

To create a friendly riverside environment for residents, the city government and its agencies organized a series of events taking place at the riverside park, such as a series of summer and aquatic-event themed activities organized by the Department of Sports and the Public Transportation Office.

Organized by the Department of Information and Tourism, the Riverside Music Festival highlights weekly live music concerts each weekend, as well as marketplace and hands-on canoeing and rafting activities.

The “Lovers’ Day at Dadaocheng” of the Riverside Music Festival also commemorates the upcoming Chinese Valentine’s Day. This year, the organizers invited celebrities such as Matthew Lien, the rock group “Chairman,” and Bobby Chen to perform at the event.

In addition, the organizers also gave away 1,000 LED “message in a bottle” light sticks to participants, lighting up the massive crowd as they cheered for the performers.

The firework took place alongside the music from classical movies, oldies, pop music, and Taiwanese folksongs.