10 Things to Pay Attention to When Visiting a Taiwanese Temple Taiwan has thousands of temples devoted to Buddhism, Confucianism, Taoism or folk religion. All of these faiths, and their numerous deities, however, often coexist peacefully under one roof. Unique, beautiful and sometimes awash in incense and fireworks, Taiwanese temples can be a bit culturally and visually overwhelming for a first-time visitor. With a little prep time, you will be able to better understand and enjoy your temple experience.

If one thing rings true about Taiwan, it's that there's often something to celebrate at your nearest temple. Temple festivals sometimes denote a god's birthday, and there are many on the calendar. The birthday of Mazu(媽祖), for instance, is a huge celebration, taking place in either April or May, where the Goddess of the Sea is feted for watching over the lives of fishermen and other seafaring folk. Then there are cultural festivities such as the Baosheng Cultural Festival, a celebration of the birthday of the God of Medicine.

As for the aesthetics of the temples themselves, Confucian temples are the least ornate because the teachings are the focus, not that artistry of the building. In contrast, at Taoist temples, tigers, dragons and human figures cover the exterior buildings in a splendor of bright colors. As for Buddhist temples, you will see Buddha statues and numerous important figures of the faith featured in the art and architecture such as the 18 Arhats, the original followers of the Gautama Buddha. Folk shrines, on the other hand, may feature the popular earth god Tudi Gong (土地公), who protects worshippers' land and lives from harm.

1.    WHAT'S THE GENERAL ETIQUETTE I SHOULD FOLLOW WHEN VISITING A TEMPLE?
The first thing you might notice is that many temples ask worshippers to slip off their shoes before entering. Oftentimes temporary slippers for guests are provided at the entrance, though larger and more popular temples may not follow this tradition. There is no strict dress code enforced, but respectful attire is both appropriate and appreciated.

Taiwanese temples have an almost dizzying amount of details to look at, but do refrain from pointing as it is considered rude to point at the gods. Instead, gesture with an open hand as if you were addressing a person.

Generally, photography is allowed in temples; if not there will be signs indicating otherwise. In any case, be mindful while taking photos. While you may be trying for a perfect shot for the 'gram, remember that you are sharing space with worshippers. Be mindful of them, respect the sanctity of the space, and try to avoid standing between a worshipper and the incense brazier or god statues.

2.    WHAT'S THE DEAL WITH THE DOOR SILL?
Temples are decorated with an abundance of artwork, including the doorways. The doors themselves are painted with Door Gods who guard the temple. When approaching an open temple, you may notice a raised wooden lip at the bottom of the entranceway, which is the door sill of the temple.

These are meant to be stepped over, never on. The raised threshold is said to have both practical and spiritual purposes. Practically, the bottom sill could prevent floodwaters from entering the temple. Spiritually, sills help prevent unwanted spirits from entering the home of the gods.

For visitors, this raised lip can serve as a gentle reminder to take a moment to acknowledge you are entering sacred space. Most door sills are made of wood but some are metal. If you are visiting a temple where you are asked to take off your shoes, do so before stepping over the raised threshold. Instead of these three figures you may see a carved pagoda. The more floors the pagoda has, the higher the main temple's deity is in the bureaucracy of the gods. Confucian temples will have pagodas with nine floors to indicate Confucius's high regard, even though he was not a deity. Other rooftop designs include dragons, flowers and figures from Chinese mythology. Rooftop fish statues are said to protect the temple by bringing water in the event of a fire. 4.    WHAT DO ALL THE DRAGONS MEAN?
Dragons are an important part of traditional Chinese culture and featured heavily in Taiwanese temples. The mythical beasts signify power, good fortune, wisdom and creativity. They act as temple guardians, but are also symbols of enlightenment. You will find them on the rooftop, carved around the temple poles and featured in temple artwork.

If you look closely at a dragon sculpture, you may notice that the creature is actually a fusion of multiple animals. For instance, its eyes are said to be those of a cat, so as to allow it to see in the dark. Besides, its claws come from the majestic eagle. If you look closely at the claws on temple poles, you may find that the more claws the dragon has, the higher the status of the temple. Dragons also appear in alternative body shapes. A dragon can manifest with a normal dragon's head, but be attached to the body of a horse, a tortoise, or even a phoenix. 5.    WHICH DOOR SHOULD I WALK THROUGH?
Temples generally have three doorways. If you're at all confused about which one to walk through, just remember this simple protocol: the dragons lead the way. When you are facing the temple, the door on your right will feature artwork with a dragon. This is the door you should enter through. To your left will be artwork featuring a tiger. This is the exit. In Chinese culture, it is considered auspicious to enter a temple with the dragon and exit with the tiger. Entering and exiting in this fashion moves visitors through the temple in a counter-clockwise fashion. Avoid walking through the middle doorway, as this entrance is reserved for the gods. However, this practice may be disregarded during festivals or at more popular temples because of large crowds. Keep in mind that smaller shrines may only have one small doorway. 6.    WHAT DO THE STONE LIONS SIGNIFY?
When approaching a temple, you will notice a pair of stone lions at the front. Sometimes the two lions will be carved identically, but a closer look will reveal that one is male, and the other is female. The lion closest to the dragon door is male, and he is often carved holding a gold coin or ball. The female is closest to the tiger door, and will have a baby lion underneath her. While you are generally not permitted to touch the temple decorations, worshippers may gently place their hands inside the lions' mouths. If you do, carefully touch the ball inside to see if it moves. While decorative, this clever bit of artistry serves as an indication of the advanced carving skills of the creator. Look closely, and you will see the ball was carved inside the lion's mouth, not carved separately and placed within, and cannot be removed. 7.    ARE THE FOOD AND FLOWERS DONATIONS?
When visiting a temple, you may see bouquets of flowers or plates of food placed on tables before the deities. Both are offerings to the gods. Food offerings are traditionally raw and uncut, so it is common to see fresh fruit. A contemporary offering you may see is packaged food. While food, flowers and incense are the most common offerings, offering practices of some specific temples and deities are more distinct. For example, goddesses may be offered beauty products or particular flower varieties, and gods related to agriculture may be offered rice. While everyday offerings are common, larger celebrations, such as the aforementioned Baosheng Cultural Festival, will bring a larger amount. Taiwan is a caring society, and after the gods have had their fill, the food will be given to those in need. Other temple donations include tea, candles and joss money (yellow paper that is burned in a small furnace). 8.    WHAT ARE THE DRUM AND BELL FOR?
Once inside a temple, look up to the ceiling. Taiwan's temples are richly decorated, and even the ceilings and floors serve as canvases. If there is a large drum and bell hanging from the ceiling, these two items will help you orient yourself. The bell is used to greet the morning light, so is positioned in the east. The beating of the drum announces the close of the temple at dusk, so is positioned near a western wall. If the temple is old, the bell and drum may be considered antiques, so they could be for display only. In that case, the antique versions may hang from the ceiling above their modern counterparts. Alternatively, electronic versions of the bell and drum may be played over the temple's speaker system. You are welcome to take pictures of these religious items, but please do not play them. 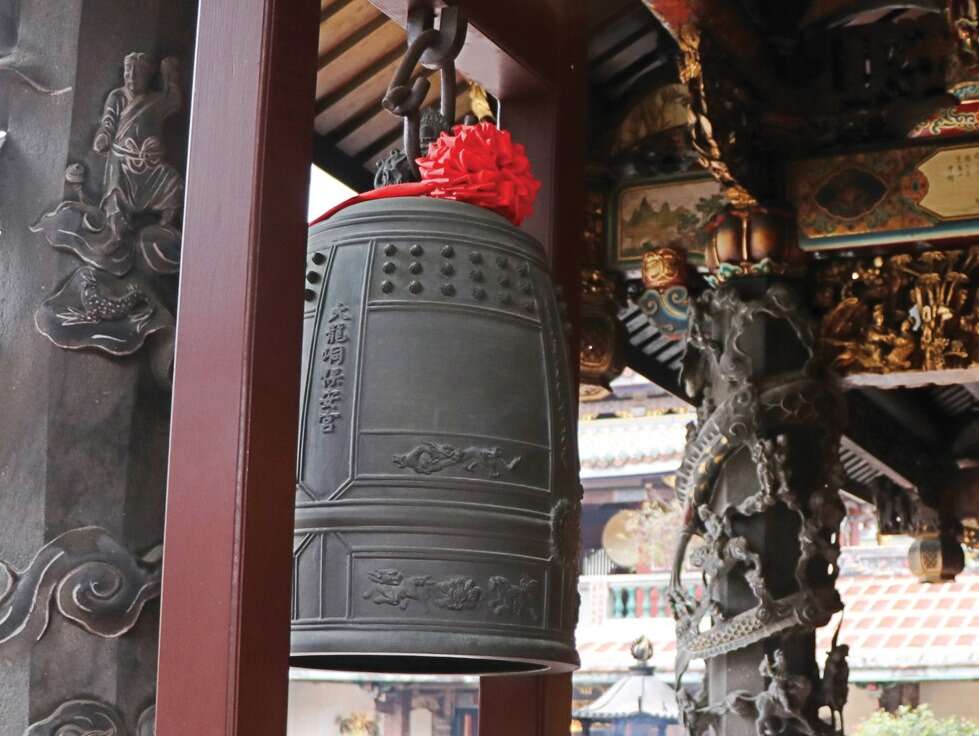 9.    WHY DO PEOPLE THROW THE RED MOON BLOCKS ON THE FLOOR?
Worshippers come to temples for many reasons. They might visit to pray, to give offerings, or to commune with the gods. If you see people tossing a pair of red moon blocks onto the floor, these are known as jiaobei (筊杯), crescent-shaped wooden blocks with one flat and one curved side. These moon blocks express the gods' answers to worshippers' questions. When visiting a temple, you are welcome to try them out. There is a designated area where jiaobei are used. Go there and take a pair firstly. Then introduce yourself to the gods of the temple. Ask them a yes-no question and then drop the blocks on the floor. The landing position of the blocks reveals your answer. If they both land flat side down, the answer is no. The curved sides both landing down means your question is irrelevant, and the rocking blocks indicate the gods are laughing. For an affirmative answer, you'll need one block to land curved side up and the other curved side down. Jiaobei are typically tossed between one and three times for any particular question. 10.    WHAT IS THE REASON FOR THE WALL OF LIGHTS?
Many temples in Taiwan have a wall filled with glowing lights, known as guangmingdeng (光明燈), or blessing lights. This wall is actually made of numerous small boxes with a light and small figure in each one. The figure inside will match one of the main temple deities. At the bottom of each box, you'll see Chinese characters. This is the name of the person to whom the box is dedicated. In order to make a donation to the temple, worshippers reserve a box for a loved one. Having a box dedicated to you is believed to bring you good fortune. Temples function as community centers in Taiwan. They provide gathering space to worship, and their tranquil courtyards provide space for tranquility and reflection. Temples are also a space for the community to celebrate the joys of life together. These walls of blessing lights reflect this communal spirit. 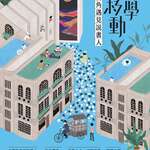