The piano bounces out a ragtime melody as Wade Lin (林漢威) walks us through the basics of the Charleston (查爾斯頓舞), his leather brogues twisting left and right as he steps to the lively downbeats.

"Whether they're doing the Charleston, the Lindy Hop (林迪舞), Balboa, or West Coast Swing, every swing dancer has their own personality when they start moving. That's what I love the most about it," he says. Wade Lin, 33, is the founder of Swing Taiwan, a studio that, despite its relatively short history, has already seen over 6,000 dancers boogie through its doors, and he certainly looks the part. Smartly dressed in a plissé dress shirt, textured flat cap, and pleated trousers, he tells us about the nostalgic dance style that has Taipei on its feet. 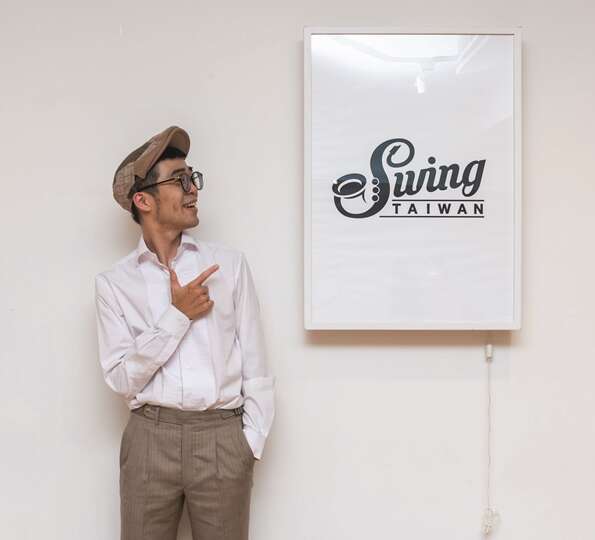 ▲Wade Lin, founder of Swing Taiwan, hopes to share with more people the happiness he experienced through swing. (Photo/Samil Kuo)

From the South to the Savoy: Swing's Roots
Instantly recognizable for its lively twists, slides, and turns, swing first took over dance floors in the US during the 1920s. Rooted in African-American culture, the dance first evolved from African styles in the South, and reached wider audiences after the popularization of styles such as the Charleston in 1923 and Lindy Hop in 1928. Swing ballrooms such as the Savoy in New York stood out during this time as some of the first places to encourage interracial mixing and dancing. ▲Originating in the US in the 1920s, swing began in African-American communities and became a relaxing activity for many during the Great Depression. (Photo/Walery)

Swing emerged during a time when racial and economic inequality meant that African Americans had very little time to themselves, explains Lin. So, it filled an important role as a social activity that allowed them to come together and make friends. It was something for them to look forward to every Friday night to release the pressure inflicted by heavy work and society at large. In addition, during the Great Depression, enjoying jazz and moving their bodies freely to the music became a way to escape the drudgery of everyday life for many people.

Creating a Social Dance Culture in Taipei
The openness of swing was what first drew Lin to the dance while he was on exchange in the US. "I had been very lonely at that time because my English wasn't that good and it was difficult to make friends. So, one day one of my teachers took me and my classmates along to a gallery opening where there was this social dancing event. People invited me onto the dance floor and suddenly we had this thing that connected us. I had something I could enjoy with everyone in spite of my language abilities."

Lin was hooked, and on returning to Taipei, he searched for a way to continue dancing. "There was a professor at my school, National Taiwan University of Science and Technology (國立台灣科技大學), who taught English through swing, so I signed up immediately," he remembers.

Regular classes were great, but Lin wanted to do more than just learn to kick and slide. "Swing isn't just a dance; it's a culture — a culture of social dance," he says. "You create a social environment where you put on some swing music, pour a few drinks for everyone, and they can socialize and make new friends while also connecting through the steps of the dance." ▲Once you learn the basic moves of swing, you can join the crowd and dance. (Photo/Swing Taiwan)

Looking to bring this dynamic culture to the campus, Lin started organizing Friday night dances in his laboratory in 2011. "People would come on Friday nights and we'd have some drinks and dance to swing music," he says.

Noticing how successful these weekly meets were, Lin saw the potential for these swinging social dance parties to become a hit with jazz lovers across Taipei. It wasn't long before he found more suitable stomping grounds. Starting in 2012, Lin held free Friday night swing socials at Huashan 1914 Creative Park, a former Japanese sake-distillery turned culture park near MRT Zhongxiao Xinsheng Station. "Before the outbreak of local COVID-19 cases in May, we used to fill dance floors with up to 200 people, 50 times a year," he explains. "I guess that shows what a roaring success swing dancing has become in Taipei over the past few years." ▲Many popular spots in Taipei have also become ballrooms for swing dancers from all over to enjoy the vitality of the city. (Photo/Swing Taiwan)

Beating the Pandemic Blues
With Taipei in semi-lockdown at the time of writing, Swing Taiwan continues to offer classes online. Luckily, Lin tells us, the vast majority of his students are learning the Charleston, a subtype of swing that can be danced solo and practiced at home.

"I show them the moves over Instagram Live and sometimes invite international teachers on as well, so we keep things interesting," he says, "It has actually helped us have a more diverse class because students from Europe and North America also join us." In addition, Lin also started offering Swing Fit classes, a retro-jazz take on zumba for those looking to work up a sweat.

More than Just a Dance
"Swing is social," says Lin. "It's all about call and response. When you dance swing, you show your personality. We get a lot of engineers, single people, people who might not otherwise go out and socialize," he adds, explaining that swing helps them bring out a side of themselves that they might not otherwise connect with.

"One of the most important things is that the Taipei scene is very welcoming. No one judges you for your dancing ability," he explains. No previous dancing experience is required to join Swing Taiwan's classes or to attend the social dance events. The company also teaches bilingually, and about 10 percent of the students are international. It's a great way for visitors to get to know local Taiwanese people. Lin also says that learning swing has been a life-changing experience for a number of his students. He's not exaggerating. "About 20 of the couples that danced at my class ended up getting married," he laughs. "Even if you don't marry your dance partner, learning swing can still be a game-changer," Lin continues. "When you learn the dance, you come into this big bubble, you connect with people, and you get confidence. With swing, you can start over." ▲Joining swing activities is one of the best ways to meet new people in Taipei. (Photo/Swing Taiwan)

How to Dance Swing at Home
Lin's swing style of choice is the Charleston, an energetic dance that was popularized in the twenties with the Broadway musical Runnin' Wild. Here, he walks us through a couple of classic moves from this upbeat step.

The Crosswalk
A great party trick to add to your roster, the crosswalk is simple to master but impressive when you bust it out on the dance floor. Begin with your feet in a T-shape, your legs crossed slightly and right foot angled out at 90 degrees from the left.

On the next half beat, uncross your legs and open your feet, pivoting onto your toes as you do so, before pulling your right foot back behind your left and returning it to the T. Rinse and repeat for eight counts so that with each beat your feet uncross and recross again. As you catch the rhythm, you'll almost seem to glide backward as your feet twist to and fro to the music. 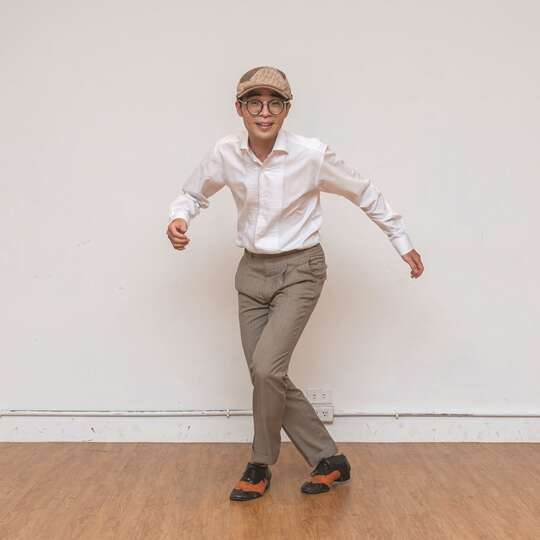 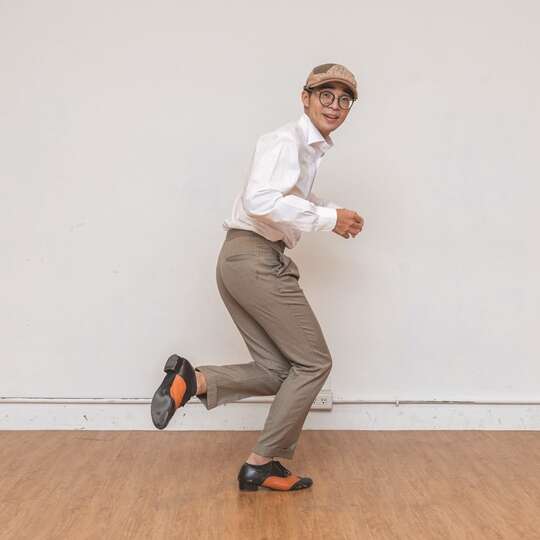 ▲The crosswalk is an iconic move in swing, following the rhythm to cross and uncross your legs repeatedly. (Photo/Samil Kuo)

The big kick is a variation of this step. When you bring your right foot out to the front, kick it across your body to 10 o'clock to achieve the swinging arc that gives the move its name. Then, using the momentum of the kick, take a big step back with your right foot and drag your left behind. This is what creates the slide effect. 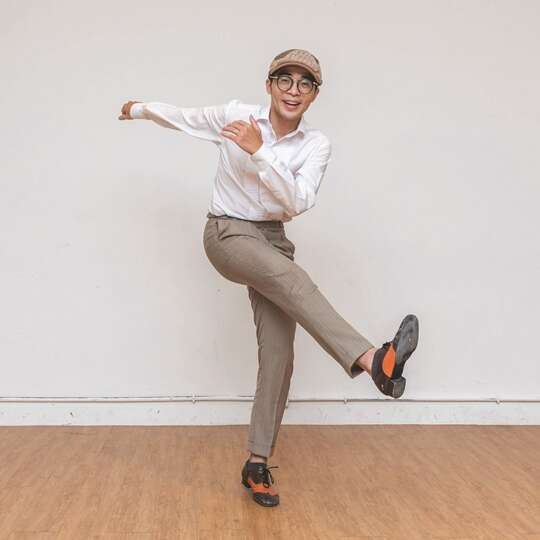 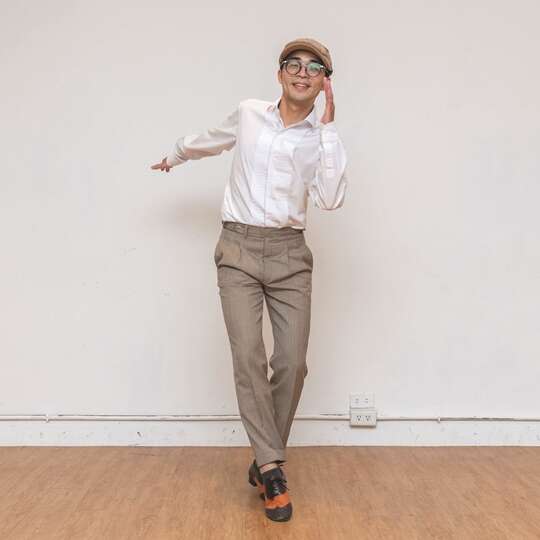 ▲Kick the right foot and step with the left one, moving one step forward with the right foot, and slide the left foot back to achieve the "Big Kick and Slide." (Photo/Samil Kuo)


COVID-19 ALERT
A friendly reminder from TAIPEI during the COVID-19 restrictions. When going out, please wear a mask and follow the epidemic prevention regulations. 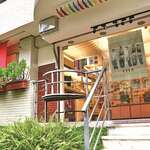 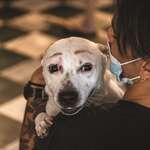