Sound Tripping: The Life of a Vinyl Record Transcriptionist

With the rise of digital technology and music streaming platforms, it’s difficult for people nowadays to imagine using a hand-cranked gramophone to play vinyl records. Nevertheless, Friedman Wang (王信凱), founder and director of the Classical Palace Society (古殿樂藏) near MRT Mingde Station (捷運明德站), has devoted his entire life to the promotion and transcription of vinyl records here in Taipei. ▲Being one of just a few record transcriptionists in Taiwan, Wang is dedicated to preserving precious historical recordings.

​​Differences Between Shellac Records, Vinyl Records, and CDs
Unbeknownst to many, shellac records existed long before vinyl records. “Actually, shellac was sort of the ‘father’ of vinyl,” Wang tells us. “The technology was just beginning to develop at the time, right around the era of the gramophone during the late 1890s to the mid-1900s.” So, what’s the difference? “When shellac records were born, one song could only be pressed on one record. But due to its material, it was very fragile and could be damaged if played too many times,” Wang shares. ▲Though they carry valuable recordings, shellac records are fragile and easily damaged.

“However, with the improvement of technology, people began using plastic instead, which has become what we now know as vinyl records. But, in fact, the appearance is no different. It’s only the material and technology that have changed.”

Modern technology has brought about the digitization of sound. Hot on the heels of cassette tapes, CDs became the more popular music medium. With technology changing every day, the ways of listening to music have undergone change, too. “Actually, with the recent introduction of online music streaming, even CDs are becoming obsolete now!” Wang laughs. ▲One of Wang's prized possessions is a gramophone produced in the 1920s, well-preserved and still functional from the turntable to the needle.

History of Taipei’s Vinyl Records
Shellac records came to Taiwan in the 1910s, during the Japanese era, and began their journey of popularization. The local record industry reached its peak from the 1960s to the 1970s, as the production process of vinyl records was optimized, and so shellac records occupied only a small niche in the market due to its high price. “I remember most of the record stores were clustered in Gongguan (公館), since many of the professors at [nearby] National Taiwan University (NTU, 國立台灣大學) enjoyed listening, and were the minority who could afford [to buy records]” Wang recalls.

Regardless of the price, the passion of record fans still ran high. “There would be people hunting for specific records persistently. Rose Records (玫瑰唱片) near NTU would even send people abroad to import and purchase classical records!” Wang laughs. “Although it was very expensive, they would always sell out quickly!” he claims.

The Work of a Record Transcriptionist ▲Wang's studio, the Classical Palace Society, is where he transcribes records, with many of his works from the pantheon of classical music.

If one looks closely, one might notice that shellac and vinyl records are actually covered with notches. As for the principle behind this technology, “Actually, the wave pattern of sound waves is what gets directly engraved onto the black film, and then the turntable stylus is what records these waves. The vibration is generated between the tracks, and the sound is then restored onto the record, foregoing any digital processing in the middle — capturing pure analog,” Wang informs us. “My job is to re-transcribe and preserve these historical recordings, so I call myself a ‘record transcriptionist,’” he says proudly. “In fact, there are many people abroad already doing this, but the concept is still new here.”

Considering the fragility of old records, Wang points out that any record that is precious and worth preserving should be transcribed. “It’s similar to flipping through historical textbooks. If you keep flipping, they will eventually get damaged over time!” he shares. As such, many museums have begun digitizing precious historical texts by creating online or photo versions to study instead — keeping the original versions as treasures. Vinyl record transcription is no different. “We work by digitizing original recordings so people can continue to appreciate these sounds; otherwise, if they are played all the time, eventually they, too, will be damaged!” Wang proclaims.

Preparation & Process of Vinyl Record Transcription
“To be honest, transcription is not difficult...but it can also be very difficult!” Wang chuckles when we asked about how to transcribe a record. Apparently, there is no fixed process, and everyone uses different methods and equipment. “In the beginning, I experimented with transcribing from scratch. But because I didn't study professional recording, the equipment I used was very amateur, meaning a turntable, vinyl record, a computer, and a microphone.” To Wang, the goal was simple: play the vinyl record out loud live and transcribe it in a way that everyone else could hear the same sound. But what followed was a series of trial and error.

“Actually, I compare it to taking pictures with negatives. In the past, photographers would frame the picture, adjust the external focus and lighting, and then press the shutter. Afterwards, they would develop the photos themselves, using different solutions and exposure levels, which ultimately affected the final product. And if they didn’t like it, they would ask what went wrong? And how can it be adjusted?” Wang shares. Just as the process starts all over again until the proper photo quality is achieved, transcription shares the same process. Each link affects the final recording, so it’s necessary to constantly adjust the methods. For example, adjusting the distance and placement of the microphone is something that Wang repeatedly works on. “Just like ‘focusing’ a photo, I need to find the right place and angle to set the microphone to get the right sound. So, I guess my daily routine is to try, fail and try again!” ▲Wang's studio, the Classical Palace Society, is where he transcribes records, with many of his works from the pantheon of classical music.

Challenges of Vinyl Transcription
When it comes to the difficulties of working in the industry, Wang sighs before answering. “In the past, due to martial law, music and sound recordings could not be released in large quantities,” he explains. “Also, people back then were poorer, so it was expensive to buy genuine records. Therefore, pirated records came about.” However, while the government and music creators tried to fight piracy, people began to have a bad impression of recording other people's work. “So, whenever I’d tell people I worked in vinyl transcription, they thought I was doing pirated music,” Wang goes on.

The emergence of copyright and modern law has also further affected what can be transcribed. “In Taiwan, any records published for more than 50 years, or in which the songwriters have passed away for more than 50 years, becomes public property (without copyright) and can be transcribed. That’s why transcribed works are mostly classical music,” Wang informs us. “Protecting copyright is important. I have no doubt about that. But my biggest challenge is that people don’t know enough about the preservation of historical recordings. I honestly believe more people would work in this industry if they knew it involved preserving culture and history.”

How to Appreciate Vinyl Records in Taipei
Wang proudly claims, “Nowadays you can find many vinyl record meetings and lectures. Before the COVID-19 pandemic, I would hold meetings every Friday night at my studio for people to come and appreciate different music genres. Unfortunately, it has since been suspended, but recently we’ve been planning to resume again.”

Workshops, seminars, and book clubs for music fans are actually held by vinyl lovers themselves. “MarTeaux Café & Musical Performing Arts Theater (瑪多咖啡&十方音樂劇場), for example, is my friend’s place, where people enjoy all kinds of art performances, including musicals, recitals and more. In fact, I host sharing sessions of vinyl records there often, too!” Wang shares.

For vinyl treasure hunters, Wang points out several secret spots too. “You can also check out Wind Song Music (韻順唱片) in the Shuanglian (雙連) area, a small store that has been operating since 1990. The owner is one of the pioneers who brings all kinds of vinyl records to Taiwan from overseas,” he shares, “For tourists, Syntrend Creative Park (三創生活園區) and Eslite Bookstore (誠品書店) have vinyl corners too. You’ll be sure to find treasures everywhere in Taipei!” 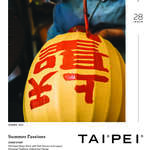