The Unique Tradition of the Eight Generals and the Highlights of Taipei Qingshan King Festival (TAIPEI Quarterly 2022 Autumn Vol.29) Watching a Taiwanese temple procession is a feast for the senses — the sound of firecrackers, the smell of incense, the sight of the vibrant embroidered banners. One of the most fascinating aspects of these processions are the Ba Jia Jiang (八家將, Eight Generals). They walk in specific formations, wearing bright costumes, carrying a variety of implements and performing rituals as the guardians of the god processing behind.

The history and traditions of the Eight Generals are as vivid and intricate as the paint adorning their faces. We sat down with Lujiang Ming (呂江銘), an expert and author of several books on the Eight Generals, to learn more about this distinctive tradition and the big cultural event that is taking place in Taipei in autumn — the Qingshan King Festival (青山王祭).

Q1 — The Eight Generals are often seen in temple festivals in Taiwan. What are their origins?

The Eight Generals originated in Fuzhou (福州), China. The tradition only existed there, at the local Bailong An temple (白龍庵), dedicated to the Great Emperors of the Five Blessings or Wufudadi (五福大帝) — the Five Plague Gods, who help banish pestilence. The generals act as guards for Wufudadi, and clear the way during processions by capturing evil spirits before the god arrives.

When some Fuzhou residents decided to settle in Taiwan in 1745, they wanted those guards for protection. Therefore, they established a new Bailong An temple in Tainan (台南), southern Taiwan. Though there is still a Bailong An temple in Fuzhou, the tradition of the Eight Generals was lost there, surviving only in Taiwan and growing popular at other temples.

Over the course of time, the culture of Eight Generals has developed into 41 different types across Taiwan, which are named and cataloged by the composition of the troupe. They can all be broadly called Jia Jiang (家將, the home generals), but troupes from different regions prefer different names. For example, they are called Ba Jia Jiang (the eight “home” generals) in the south, but Ba Jiang (八將, the eight generals) in Taipei. There are also Wu Lang Jiang (五狼將) in Taichung, meaning the Five Wolf Generals.

Q2 — What role does each of the Eight Generals play? ▲The procession of Ba Jia Jiang consists of three officers, eight generals and one god, lining up in the order as shown above.

For Wufudadi, the formation consists of eight generals in the back, and three non-generals in the front. That’s why we call them the Eight — rather than Eleven — Generals. In addition to the leader, named Shiyi (什役) or Xingjuye (刑具爺), who carries weapons for the troupe, the other two in front are Wenchaiye (文差爺) and Wuchaiye (武差爺). Wenchaiye carries a board (令牌) and receives orders from the god. He instructs Wuchaiye, who will let the generals behind them know what to do. Thus, Wuchaiye carries a flag to instruct the troupe.

The four generals at the front capture evil spirits, clearing the road before the god’s arrival. These are Generals Gan (甘), Liu (柳), Hsieh (謝) and Fan (范). Hsieh and Fan are the same as the tall gods Qiye (七爺) and Baye (八爺), who carry neck or hand locks, or a bamboo staff with a scooped end called a jiegun (戒棍).

The four at the back are named after the seasons, and are tasked with interrogating captured spirits. That’s why all the tools they hold are related to interrogation. For example, General Spring (春大神) holds a fiery iron pot. General Summer (夏大神) carries a water bucket to splash the demons if they pass out from interrogation. General Autumn (秋大神) carries a melon-shaped stick, and General Winter (冬大神) carries a snake-shaped metal whip to intimidate and force the demons to tell the truth. Some troupes use a real snake, but this is very rare.

When gods other than Wufudadi have guard troupes, they may differ, as each god has their own preferred generals. It’s possible to add more generals for larger troupes, but each general needs a distinctive face paint design.

Q3 — Please explain the processional formation of the Eight Generals, as well as the meanings they represent.

There are many possible formations, but two popular ones are the Qixing (七星, Seven Stars) and Bagua (八卦, Eight Trigrams). The Qixing is named after the Big Dipper, and is believed to bring good luck. It’s a crab walk or zigzag with several variations. The Bagua (based on Taoist cosmology) has the Eight Generals in dyadic circles. As they move around the positions of the different symbols, they create an eight-sided Bagua. The qi (氣) from that formation rises to the Bagua in the temple’s ceiling design, and protects the whole area. The Bagua should be moving to work; unlike a ceiling, the Eight Generals are ambulatory, so this is a deeply significant formation. There are 64 total combinations in the movement, each with a different meaning.

Q4 — Tell us about the clothing and makeup of the Eight Generals. Are there any special designs or meanings?

Their dress features papier-mâché headdresses, embroidered clothing and distinctive shoes with bells. The face makeup follows fundamental design rules, but temples can get creative within those boundaries. Many makeup artists are tattoo artists by profession, and the designs ought to be scary, as they are catching evil spirits, so they must be more frightening than the spirits they seek. The idea is to “fight poison with poison.”

Often, the colors of the generals are based on red and green: the red generals carry neck locks and the green ones carry hand locks to detain evil spirits. Blue is one variation on green, and orange a variation on red. In the past, only certain colors were common, but now, new designs and colors (such as purple) are becoming popular. If the troupe is participating in a multi-day festival, they should wear the same makeup designs each day so the gods can recognize them. ▲Each general has his own unique facial features. General Hsieh is associated with a crane.

The generals of the four seasons each have a distinct pattern based on items and animals related to Guanyin (觀音), a Buddhist deity. Spring is decorated with an upside-down gourd (葫蘆), and Summer has a lotus design. Autumn incorporates a parrot design, with a beak-like feature and often feathers. Winter has a tiger design; sometimes a whole tiger body design is chosen, but sometimes just the face. ▲Each general has his own unique facial features. General Spring (top) has an upside-down gourd on his face, while General Winter (bottom) is distinguished by a tiger design.

Q5 — Are there any etiquette rules or taboos to be aware of when watching the Eight Generals in a temple procession?

There are many rules, in fact. Don’t touch or talk to the Eight Generals when they are in the parade, as they are like gods when performing. Don’t cut across a troupe of them walking or in formation. If they’re creating the Bagua formation, this will ruin the qi and destroy the Bagua. Furthermore, don’t talk to them or linger, especially while they are getting ready, and if possible, ask for permission if you want to take a picture when they are taking a rest. Try not to take pictures of them eating or drinking.

Traditionally, menstruating women should not attend temple processions or watch the Eight Generals. However, in modern times it’s acceptable to go. Regardless of gender, it’s strongly recommended not to come if something unfortunate has happened in your family, such as a death, as you’d be bringing that bad luck with you. ▲Locals gather every year at the Qingshan King Festival, joining the large-scale event that is believed to bless the whole Wanhua area.

Q6 — The Taipei Qingshan King Festival is known for having such generals. Can you share some highlights of this?

The Qingshan King Festival is for Lord Qingshan’s (青山王) birthday, which is October 23rd on the lunar calendar. Lord Qingshan has his own guards in the festival, and they are typically called the “Ba Jiang” or “the Eight Generals,” not “Ba Jia Jiang” or “the Eight Home Generals.” His generals have the hand lock and neck lock, and the others are named after the weapons they carry. The person at the front is usually a child; audiences find it cute to do this. He’s thought to be a type of bird and carries a gourd, and his job is to light the way for the troupe. ▲The generals at the Qingshan King Festival are led by a child who carries a gourd to light up the road for the procession.

In Wanhua (萬華), where the Bangka Qingshan Temple (艋舺青山宮) is located, the troupe emphasizes the red and green face paint. There are usually four of each kind, carrying different weapons, for a total of eight. The Qingshan King Festival is the only event you can see them each year, making it a unique experience.

Q7 — The night patrol at the Qingshan King Festival is a highlight of the event. What makes it so special?

Lord Qingshan acts as a City God for Wanhua/Bangka, because the settlers who moved to Wanhua after a local skirmish in 1853 took the City God to what is now Taipei Xia-Hai City God Temple (台北霞海城隍廟) in Dadaocheng (大稻埕). Thus, Wanhua needed a god to perform that role.

As Lord Qingshan manages the affairs of both our world and the underworld, he was asked by locals. If a god manages both worlds — corresponding to yin (陰) and yang (陽) or light and dark — his troupe will also come out at night, guarding the neighborhood. Thus, we have the night patrol ceremony at the Qingshan King Festival. It’s also considered more interesting, mystic and fun at night. ▲Generals Hsieh and Fan can both be seen in the procession of the Qingshan King Festival. (Photo/Samil Kuo)

Lord Qingshan troupe’s “jurisdiction” ranges from Changsha Street (長沙街), to Huanhe South Road (環河南路), to Ximending — basically the whole Wanhua area. Firecrackers are lit along the parade, lighting up the night. Participants shout and make all kinds of noises along the way, trying to scare away the bad spirits. It’s truly an immersive event that allows you to enjoy an authentic Taiwan experience.

Q8 — Are there any suggestions for foreigners who want to participate in the Qingshan King Festival?

Taipei is an open city, so there’s no need to buy a ticket. Anyone can come. Just be sure to follow the etiquette rules, such as not cutting across the troupe, and don’t get in their way when they’re performing. Notice that all the festivals follow the lunar calendar. The Qingshan King Festival is so popular because it’s one of the larger cultural events in Taipei. The actual festival takes place on the three preceding days, from October 20th to the 22nd on the lunar calendar, with the largest festival on the third day. On the Western calendar, that will be November 13th to 15th this year, starting in the afternoon and going into the night. ▲Bangka Qingshan Temple has a history over 150 years, and plays the role of religious center for local residents. (Photo/Samil Kuo) 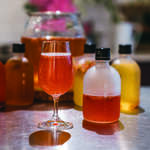