▲Made from yeast, sugar, and tea, kombucha is a sweet fermented drink that has become a top choice when it comes to healthy beverages worldwide.

Kombucha has become the new star when it comes to healthy drinks in Europe and the United States, and is gradually becoming popular in Taiwan as well. It can easily be made with quality Taiwanese tea, herbs, and fruits nourished by the local terroir, giving birth to kombucha flavors unique to the country.

But let’s back up for a moment. What exactly is kombucha? For the uninitiated, kombucha is a fermented tea drink that combines tea, sugar, and a “mother (a symbiotic culture of bacteria and yeast, or SCOBY)”. The not-so-secret ingredient is the process of fermentation, which has been developed in almost every human culture around the world.

The fermentation process allows microorganisms to break down food into small molecules that can be better absorbed by the human body, and produce trace elements at the same time. It is a process that takes time to infuse food with rich, mature flavors and extends the shelf life of food. Wine, vinegar, sauerkraut, cheese, soy sauce, miso, and kimchi are all common fermented foods.

The Process of Making Kombucha
Yo-Si Chen (陳宥希), the founder of Min Min Kombucha (茗茗茶香檳), a Taipei-based brand, shares with us how kombucha is made. The first step is to brew tea. Black tea is the most common type used for kombucha, but oolong tea works just as well. Add sugar, and let it dissolve into the tea broth. Then let the tea cool down, pour it into a sterilized glass jar, add SCOBY, and cover the jar with a cotton cloth. Place the jar in a dry and well-ventilated place away from light, and it’s almost done. Now, it’s fermentation time. The process may seem simple, but the proper fermentation of kombucha depends on whether the producer has the correct knowledge of good hygiene and environmental control. Chen says that she disinfects all the containers and tools with 75% alcohol and is rigorous when it comes to the details of the process. She has brewed close to 200 batches of kombucha and has never had any problems with mold or spoilage. Chen reminds people who make their own kombucha at home that if they see mold or anything that looks like lint on their kombucha, they must throw away the whole barrel and use clean SCOBY to start again.

The SCOBY, which is indispensable to the production of kombucha, isn’t a single strain of bacteria or a type of fungus, but is instead a symbiotic product of yeast, lactic acid bacteria, and acetic acid bacteria. Since kombucha is rich in probiotics and vitamins, infants and children under two years old, and people with extreme allergies to alcohol, caffeine, and yeast are advised to avoid the drink. The Philosophy Behind Hand-brewed Kombucha
“I used to drink up to five cups of sweet tea drinks a day!” Chen laughs, admitting that she was dependent on sugary drinks, but that changed drastically after she came into contact with fermented beverages and kombucha. She began her research on fermented food after trying homemade plum wine, and found the taste phenomenal. She then found kombucha popping up over and over again as she pored over every conceivable bit of information on the subject. She decided to try making it, and imported her first SCOBY from a like-minded cultivator. The first batch she produced made her fall in love with the drink.

Kombucha has the theanine and antioxidants of tea and healthy bacteria. It is low in sugar and caffeine, and it allows people to experience the charm of fermentation in a short time. After Chen devoted herself to the world of kombucha, it became natural for her to give up her addiction to sugary drinks. Once her friends and family tried her kombucha, they were enthusiastic about it and expressed their willingness to buy it, and so her new passion quickly became a business opportunity. ▲Through her kombucha business, Chen is now able to take concrete actions to support the production of organic tea, fruits, and spices made in Taiwan.

“Kombucha is a vehicle through which I can realize the issues I care about,” she says. Having worked in community development and non-profit organizations, Chen has always been concerned with sustainable, organic, and environmentally-friendly agriculture. By developing her kombucha business, she can take tangible action to support the organic production of tea, fruits, and spices in Taiwan.

The Uniqueness of Kombucha in Taiwan
The key to good kombucha is good raw materials. Chen carefully selects organic black tea from Yilan (宜蘭), tea leaves from wild tea trees in Nantou (南投), oolong tea that was the first to be certified as carbon neutral in Taiwan, and wild fish mint tea. She uses either one kind of tea or a blend of two teas as the base for her kombucha. She also chooses ingredients such as organic roses, grass-cultivated red-fleshed rainbow guavas, and Irwin mangoes, Kyoho grapes from Xinshe (新社) in Taichung (台中), lemon balm, and mountain pepper for secondary fermentation. Over time and much experimentation, she has developed a variety of kombucha flavors.

Compared to Europe and the United States, which do not produce tea, and India and China, which are export-oriented, Chen believes that Taiwanese tea has superb quality, and the aroma of different tea leaves are very distinct, which make flavors more layered when they are used in a fusion of other ingredients. A local Taiwanese brand is able to produce, brew, and sell tea directly to the consumer, taking it all the way from the farm to the bottle. Therefore, Taiwan definitely has what it takes to develop specialty kombucha, just as it has enjoyed much success with the third wave of specialty coffee.

“Taiwan has a rich variety of local produce, and more and more farmers have come to support sustainability and environmental protection. I believe that as long as the brewers put their hearts into it, they will be able to offer international customers a taste of kombucha that they have never tasted before,” says Chen. ▲A variety of kombucha flavors such as organic rose, Irwin mango and Kyoho grape from Xinshe have been developed.

Chen hopes that other kombucha brands will also make the best use of Taiwanese products, create tea recipes unique to Taiwan, and encourage more people to really enjoy good food again. Starting with kombucha, she hopes people will rediscover the connection between what they eat and drink and nature itself, while also learning about the traditions and innovations of fermentation.

Places to Enjoy Kombucha in Taipei
Starting her business online, Chen’s Min Min Kombucha will soon be available at the three branches of Breeze Super (微風超市) in Taipei this October. In addition, Chen shares with us a few restaurants and cafés in Taipei that offer their own homemade kombucha.

COFE (喫茶咖啡), a café located in an old house on Dihua Street in Dadaocheng, offers kombucha made with dried coffee fruit and another variety made with oolong.

Draft Land, one of Asia’s 50 Best Bars in 2019, pairs rum with Chinese mesona and mixes the two with kombucha to make a cocktail. Its subsidiary, Daily by Draft Land, has launched a roselle kombucha that allows customers who cannot drink alcohol to enjoy a slightly tipsy feeling.

Orchid by Nobu Lee (蘭), a restaurant that was given a Plate award in the 2020 Michelin Guide for Taipei, has a non-alcoholic “Juice Tea Pairing” in their lunch and dinner drink selections, among which is a variety of homemade kombucha to go with their meals.

Through an exquisite and healthy kombucha, Min Min Kombucha has made the most of the characteristics of Taiwan’s local quality tea, fruits and produce, and brought them onto the dinner table in a different form. ▲One of the easiest ways to enjoy kombucha is to dilute it slightly with sparking water to add extra flavors.

Besides drinking fermented kombucha on its own, Chen introduces several ways to experience the drink’s versatility.

✅Blend it with other beverages
The simplest way is to slightly dilute kombucha with sparkling water to give it an added taste and texture. You can also use it in cocktails, mix it with coffee — which creates a taste similar to Sicilian lemon coffee — or add it to green latte or fruit smoothies.

✅Make it into a sauce
Kombucha can be mixed with oil, vinegar or other seasonings to add flavor to dishes. In addition, while fermenting kombucha, you can also make vinegar by taking a part of it and prolonging the fermentation time.

✅Eating the SCOBY
The SCOBY at the top of the kombucha is also edible. It forms slowly from the lignocellulosic biomass of acetic acid bacteria, has a taste similar to coconut jelly, and is full of probiotics and cellulose.

✅Skincare and cleansing
Kombucha is full of active yeast, so you can take an appropriate amount and apply it to your face as skincare and an exfoliant (not recommended for those who are sensitive to alcohol). Similar to Eco Enzymes, kombucha can also be used as a cleansing agent to remove many kinds of grime from biological sources.

✅Other applications
In addition, kombucha can also be used in the poolish for sourdough bread. Chen has even collaborated with farmers to make kombucha into compost for organic peppers, and has since been wondering what other crops she might experiment with after the harvest. 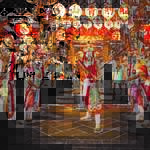 The Unique Tradition of the Eight Generals and the Highlights of Taipei Qingshan King Festival (TAIPEI Quarterly 2022 Autumn Vol.29)
List 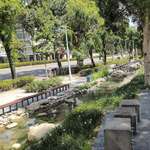