Pick Up Your Weapon, Even If It's a Pen: a Conversation with Taipei Illustrator A ee mi (TAIPEI Quarterly 2019 Autumn Vol.17)

Pick Up Your Weapon, Even If It's a Pen:
A Conversation with Taipei Illustrator A ee mi

Your average visitor to Taipei might not know that the city is home to a nascent yet vibrant illustration and animation scene. Many Taiwanese illustrators pursue independent projects, and their work can be found at an increasing number of independent bookstores and art shops, or online through their own Facebook fan pages. The first Taipei Illustration Fair (台北插畫藝術節) was held in 2018, and art spaces around Taipei such as the Songshan Cultural and Creative Park regularly hold illustration exhibitions.

One of these emerging young artists is A ee mi, who is known for her neon-bright designs that incorporate elements of Taipei city — its colorful signboards, old shopfronts and streetscapes — with strong messages on a variety of social issues.

TAIPEI sat down with A ee mi near her home in Wanhua, one of the oldest neighborhoods in Taipei, to talk about her art, the city and the issues she cares about. ▲A ee mi is a Taipei illustrator and animator who focuses on Taiwan's cultural and social issues. (Photo / Yenting Lin)

AN ARTIST FINDING HER VOICE
The first question of course went to the meaning behind her unique name. “It doesn't mean anything!” she says, laughing. “My English name was Aimee. Once I went to Seoul to attend a film festival for my thesis. I found that ‘Aimee’ was pronounced ‘a-ee-mi’ in Korean, and I felt that was more interesting.” ▲The use of bold graphics and bright, fluorescent candy colors is one of the hallmarks of A ee mi's work. (Photo/Yenting Lin)

Born and raised in Taipei, A ee mi has become an emerging voice in Taiwan's illustration scene as well as in comic and animation circles. After finishing her MFA and working briefly in New York, She returned to Taiwan in 2017 and gradually established herself as an illustrator, with the intention to explore herself more and express her views on various issues, such as gender equality, marriage equality and politics.

“A few years ago I didn't care about these things, I was just a normal person living my own life,” A ee mi says. “Before I went to the States, there was the Sunflower Movement in Taipei. Hong Kong's Yellow Umbrella movement followed right after ... and these were happening continuously, and we couldn't just turn away and say “Oh, it's not something that's related to me.” We have the power and the right to decide our future. It’s something very important that we have to be aware of.”

PUTTING TAIPEI ONTO HER PALETTE
A ee mi’s work incorporates many elements inspired by Taipei's unique aesthetic, a culture and place she feels familiar with, after the self-described “anxiety” of trying to survive in a foreign culture, alongside the financial stress of being a graduate student and then a young illustrator, in the United States. These inspirations for the “look” of her work come from signboards and neon lights, especially in older neighborhoods such as Bangka, also known as Wanhua nowadays. The use of bold graphics and bright, fluorescent candy colors is one of the hallmarks of her work. Street scenes and traditional businesses such as old-school massage parlors and barbershops also influence her designs. Noticing the environment around her as a factor in her personal style was a realization that came only after leaving Taipei and returning again. “I didn't think that the streets I usually walk down or the views I usually see would be my inspiration,” she says. “But after I came back, I started trying a new style and thinking about what I wanted to draw. It just came naturally. A lot of this early work was simply street views of Ximending and things like the streets in Bangka and old barbershops. These things were kind of old but new to me.” ▲A ee mi found that the old barbershops in Wanhua are very interesting subjects. ( Illustration / A ee mi)

A ee mi also describes the advantages and disadvantages of working as an illustrator in Taipei and the States. “The market in the US is mature but can be quite commercial sometimes,” she points out. “Taipei's market might not be as mature, but artists can do whatever they want and they won't be criticized or judged as much; If you want to do something, you can just do it.” ▲A ee mi incorporate elements of Taipei, such as the neon sign on street, into her design. (Photo / Should Wang)

Meanwhile, A ee mi does not believe there's a distinct “Taiwanese” or “American” style of illustration. “We're in a kind of information explosion,” she adds. “The boundaries have become vague.” However, she is quite clear that the surfacelevel elements of her designs influence deeper notions of what she wants to convey, and vice versa. For her, the aesthetic of Taipei and the issues facing Taipei and Taiwan are intertwined: “The issues I care about are things that happen around me in the city and in this country.” ▲The streetscapes and lifestyle around Wanhua are part of the inspirations for A ee mi's creation. (Photo / Yenting Lin)

ILLUSTRATION AND SOCIAL ISSUES RISE IN TAIPEI
A ee mi’s first foray into social issues was with Trendy Zine (流行刊物). Her partner is a clothing designer with his own brand, so when he held an exhibition, she decided to create a zine exploring the topic of fast fashion. ▲Trendy Zine is A ee mi's first physical publication, exploring the topic of fast fashion and hopes to attract more people to pay attention to this issue. (Illustration / A ee mi)

Asked why she chose fast fashion as a topic, she said she used to buy a lot of fast fashion because she didn't know what was happening behind the scenes with environmental problems and pollution. “But after my partner and I got together,” she reflects, “we talked about these issues a lot. Fast fashion companies make a lot of clothes and... most of them don't sell out, so they just dump them in Third World countries. They say ‘we're giving them clothes for free’, but do they need that many clothes?” ▲Many of A ee mi's works concentrate on social issues such as gender education, marriage equality and fast fashion. (Photo / Yenting Lin)

A ee mi only had two weeks to complete Trendy Zine, and says that most of her projects happen like that. She does plan, but doesn't like to spend too much time planning. Instead, she prefers to create when the idea strikes her. Another example of this is her comic exploring marriage equality, Red with Green (紅配綠). “I actually started it three weeks before publishing it online, so I had to work very quickly,” she says.

A ee mi has a strong interest and stake in gender equality, which her works frequently explore. “For me, gender and marriage equality just should be,” she says. “I have a lot of gay friends in Taipei, but they deserve love just as we do. In university, my gay friends were having a hard time finding themselves and figuring out how they should be in this society.”

She goes on to describe her experience growing up as a female in Taipei. “In junior high school, boys in your class will snap your bra, and they'll guess what color your underwear is,” she said. “I was a very quiet girl in my class, so a lot of boys would target me. I didn't know how to fight back. Even now, I feel that's not right. I shouldn't have been treated that way. Nobody should.”

A ee mi was driven by these experiences to create Gender Education (性別教育), a zine about how common Taiwanese swear words are sexist. “A lot of people said some really bad things that weren't even about my work,” she notes. “Sarcastic comments like ‘Feminist buffet!’ People think political correctness is boring because it's become a widely-discussed topic, but just because it is widely discussed doesn't mean the problem is solved.”

As an artist, A ee mi emphasizes that creating art to raise awareness of social issues is the most direct way to express how she feels. “Sometimes I feel kind of small,” she says. “I don't have many resources to change something. For me and my friends who are in this field, we would usually feel kind of sad — we want to effect change, but we don't know if we can.”

“Maybe some artists realize they can’t really change anything, but they still do it, she continued. “That's the point — you don't need to think about whether you can have a greater impact, but you just need to do it, because you never know. Pick up your weapon, even if it's a pen.”

THE TAIPEI ILLUSTRATION SCENE
A ee mi believes the Taipei illustration scene has changed a lot since she left in 2014. Since returning, she has been doing more independent, nonmainstream work, and, as a result, most of the people who have helped her are from independent bookstores in Taipei, or places that showcase more work from various art and design subcultures.

She goes on to add that “Those spaces have been popular in the United States for a long time, but were not that popular in Taipei before I left. But since then, a lot of bookstores opened, and they started to select different works from international or Taiwanese artists and were very willing to promote Taiwanese independent illustrators.”

Although she's something of a homebody, A ee mi feels that physical “place” in a city is important. While anyone can post work online, she believes that if there's a place like a bookstore that people can go inside and experience, there might be a much greater impact on the individual. She describes such bookstores as places “where people can enter even if they don't know anything, after they come out, they've gotten something from that and maybe fallen in love with some of the work that they found.” 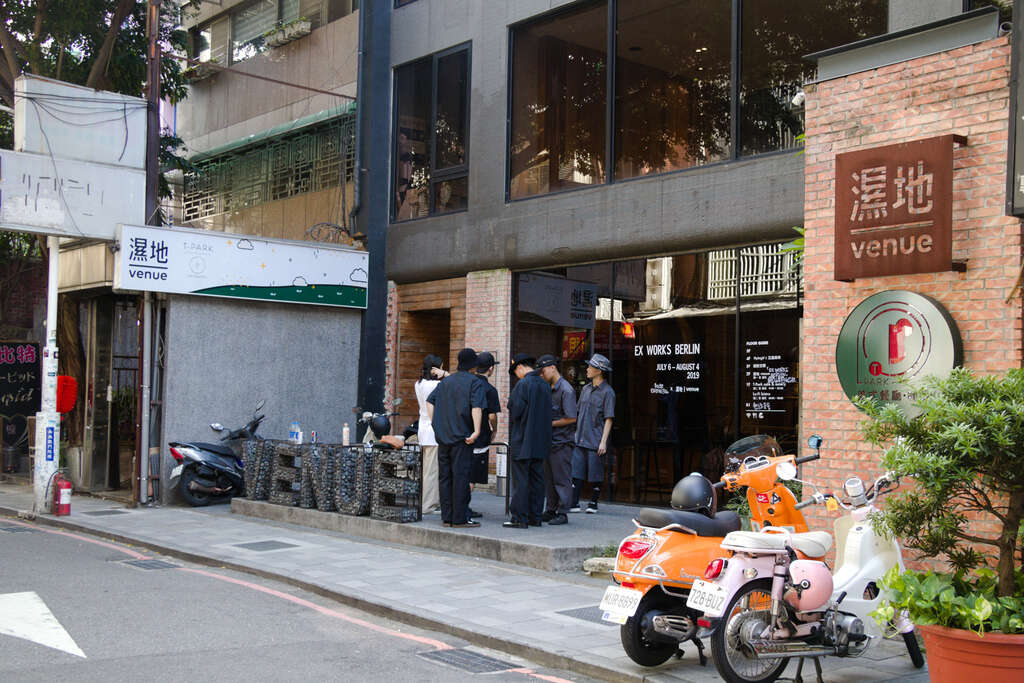 ▲Venue is a complex exhibition space, providing Taipei's artists and creators, including A ee mi, a stage to perform or to hold exhibition. (Photo / Taiwan Scene)

Wildflowerbookstore is known for carrying a variety of independent works, both internationally and from Taiwan. “No matter what you like, you'll find something.” As for PAR, it is a record store that also carries curated zines and books; Waiting Room mainly selects works from Europe or the United States, and focuses on T-shirt brands, and artists from Taipei are also showcased. In addition, A ee mi held an exhibition at Venue last February and recommends that as well. Outside of Zhongshan, she notes Mangasick, a well-known shop in Gongguan area that sells comics originating in Taipei and Japan.

Young illustrators like A ee mi who just started a career in Taipei are ready to bloom and shine. Her rebellious spirit reflects the uninhibited environment and the free stage that Taipei has offered to artists in every field. Art can be a source of entertainment or joy, yet A ee mi uses her creations to raise public awareness regarding social issues with her pen, an artistic trend in Taipei that shows people the true power of art. ▲A ee mi highly recommends wildflowerbookstore, which is known for carrying a variety of independent works, both internationally and from Taiwan. (Photo / Taiwan Scene) 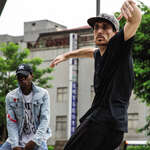 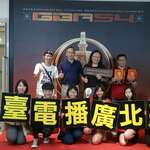