In 2015, Akira Higashiyama’s novel Ryu won the Naoki Prize, the highest honor in popular Japanese literature. Written as a mystery, it is set in 1970s Taiwan and features the elements of a youth novel. For Taiwanese readers, the work provides a view of yesteryear Taipei in the old time – and a look at themselves. The book provides stimulation and satisfaction far beyond mere reading pleasure.

A Gift From Heaven
Ryu has a smooth flow and a wellknit plot, and deftly kneads together mystery, fantasy, and realism. Shrouded in the depressive atmosphere of a bygone era, it has been hailed in Japan as one of the premier works of the past two decades. The protagonist is a young, frivolous high-school student who witnesses the brutal death of his grandfather. He decides to track down the truth behind the murder, and over the next while also goes through a wild phase. The book vividly describes life in a closed political system, echoing discussions on transitional justice in Taiwan society in recent years.
The Taiwanese writer Hsiao Yeh (小野) has gone so far as to call this book “a gift from heaven.” This alludes to the fact that such subject material was long left as unexplored territory in Taiwan’s literary circle, and that the book’s appearance now satisfies the needs of the times. 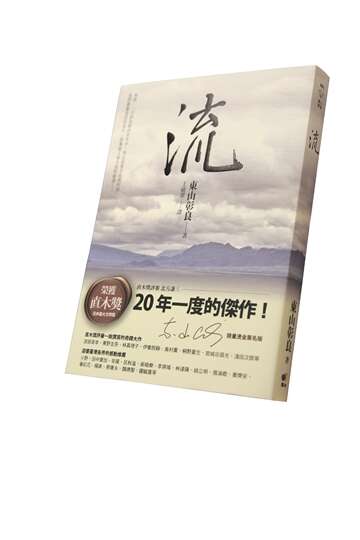 Magic and Memory
Another key reason why this book has touched readers in Taiwan is its rich evocation of the good old days. Though it describes a grim and oppressive political atmosphere, it movingly portrays the minutiae of life. Readers can almost smell the aromas of the ditches along yesteryear’s Xiamen Street (廈門街), wafting forth from the pages, and hear the noises and shouts of the city’s bustling Zhonghua Market (中華商場). All these are derived from Higashiyama’s treasured storehouse of childhood memories.
Higashiyama’s ancestral home is China’s Shandong province. He was born in Taipei, and grew up in Japan. But, his elementary school days were spent in Taiwan, and these are the sustenance for his Taiwan descriptions. “When I was a kid we lived on Xiamen Street,” he says. “And though there was still a lot of unrest in Taiwan society, for me it was a time of fond memories, filled with the love of the older generation and of my parents.”
Taiwan literature suffers no lack of descriptions of Taipei-life memories, such as Taipei People (台北人) by Pai Hsien-yung (白先勇). Ryu, in contrast, has a more straightforward manner. The characters in the book are not driven by different feelings of remorse and desire, the urgings of nationalism and culture are less palpable, and they harbor no modernist sense of alienation. Instead, they are affected by direct questions of survival, such as each time the book’s protagonist finds himself in a fight, and each emotional trauma, on each occasion a cry and confession of youth. Higashiyama’s father served as the prototype for the protagonist, and through the telling of family stories the writer pours forth a vivid torrent of the characters that made up the era’s Taipei landscape.
Interestingly, the book has many strange vignettes, such as the use of an Ouija board and the sudden appearance of great numbers of cockroaches. Though such things are familiar elements in the lives of Taiwanese readers, the author says that, “For Japanese readers this is another matter; they look on this as magical realism.” Ryu contains many bizarre scenes, but in fact the source for all are his own actual memories. Yet Japanese readers see these as exotic imaginings, and see Taiwan as a place of fantasy in comparison to Japan, lending it a deep appeal.

A Simple Youth Novel
Though this novel incorporates many associations with history, politics, and literature, Higashiyama stresses that, “This is simply a youth novel. Because the backdrop is 1970s Taipei, to give readers a realistic window I added historical and political elements. This “youth novel” involves the author’s subjective will. In places where Ryu features a humorous narrative tone, in the background is reflection of the author’s convictions. “I don’t like to impose my values on the readers,” Higashiyama says, “but in order to reflect the realities of the authoritarian era, humor is a quite natural tone.” The youth novel also involves heavy leaning on the author’s personal life history, with reliance on the readers’ ability to “empathize.” In Higashiyami’s words: “I love reading American and Latin American novels. Though these writers and I are worlds apart, I can understand their points of view in light of my own story.” In terms of using his father in the book, he served as a point of departure, as a narrator for the story. Readers can experience the pain of others through his eyes and then look back on this character to understand him.
This empathy gives Higashiyama the gift of being able to relate the larger tale of a distant city, as well as the small experiences of the almost anonymous people within it. Though he refrains from describing feelings in great depth, they are portrayed in great beauty. In the book he describes how people, though they can’t let someone go, nevertheless decide to persevere and continue on. This serves as a metaphor both for history and for universal personal fortune.

Taipei, My Original Landscape
Asked about the impressions Japanese have of Taipei, Higashiyama responds: “Most Japanese think Taipei’s people are very friendly and cheerful, and very polite. For example, whenever people see someone carrying a child they automatically yield their seat.” As for his own impressions? “Joy! My Taipei time has been the happiest of my life. Though somewhat chaotic, this was my childhood’s‘ landscape of origin.’” He also knows that, to a certain extent, these happy memories are shared with Taipei’s citizens.
Among his most vivid memories are his frequent trips with his grandfather to the Taipei Botanical Garden (台北植物園) to do g ymnastics. “These gymnastics were the recreational kind that seniors practice in the early morning,” he says. “When my grandfather demonstrated the movements to me, each careful step seemed to be imbued with deep meaning. He explained them to me, and much of what he said has proven very useful in my life.” Key pieces in the framework of his Taipei summertime memories are the Taipei Botanical Garden’s royal palms, the gorgeous red lotus lowers in its pond, and the dancing play of light and shadow in its open spaces.

He also has vivid memories of the red-brick walls in today’s Bopiliao Historic Block (剝皮寮歷史街區), the curling incense mists at the Longshan Temple, and the nearby Huaxi Street Tourist Night Market (華西 街觀光夜市). “I went many times to Huaxi Street, listening to the cries of the hawkers, enjoying the boisterous crowds and vendors. These made a deep impression on me, and the memories are just as strong and vivid today as they were in the past.”

Golden Taipei City
Higashiyama speaks fairly fluent Mandarin Chinese, and comes back frequently to Taipei. Speaking of the places he finds most interesting today, he says, “In Japan I’ll sometimes feel a need to hear Chinese, so whenever I’m here in Taiwan I’ll buy some music albums. For example, Luan Dan A Xiang (亂彈阿翔), The Chairman (董事長樂團), and 1976. When listening to Mandarin Chinese songs I find that sometimes the lyrics just can’t be conveyed in Japanese, or when translated directly have a different meaning. I find this intriguing, and it has helped my writing.” Asked about his favorite Taipei food, he enthusiastically responds, “I really like shaobing youtiao ( 燒餅油條; a type of fried cruller in a baked pastry), and recently I’ve become really fond of stir-fry dishes, especially accompanied with Taiwan Beer.” All of these are iconic Taiwan offerings – in truth, who wouldn’t fall in love with them?
When talking about a city, every person will have certain color impressions in their mind. For Higashiyama,
Taipei “has a color like the sun.” The source of this color is the good days he enjoyed here, giving him a cherished childhood and brilliant golden memories. 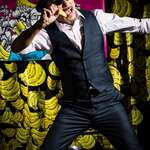