Mountainous as it may be, Taipei is a city on the water, and the city would have never been the same if not for its two main arteries, the Tamsui (淡水河) and Keelung Rivers (基隆河).

Encircling much of the city center, it was these coursing bodies that helped open the area up to Spanish exploration in the 17th century, and later brought prosperity to the area's first Chinese settlements. To this day, memories of the Tamsui and Keelung's thriving commercial past and distant indigenous heritage continue to murmur along their historic banks. Here's what to see around every bend. ▲Meandering through Taipei, the Tamsui River has long been a source of vitality for the city.

Taiwan's third-largest river, the Tamsui River runs for over 150 kilometers, flowing past some of Taipei's most historic districts. North of Ximen (西門), the vast waterway's unbroken views out toward New Taipei City lend to excellent sunsets, whether you're watching from the riverbank or a yacht rental.

Some of the river's best treats can be found with a couple of free hours and a YouBike, following the bike path north all the way up to Shezidao Daotou Park (社子島島頭公園), passing tiny shrines and temple gardens along the way. When the weather is good, Dadaocheng is many Taipeiers' favorite weekend hangout, packing a double punch of historical interest and trendy places to sit out with a beer and a snack.

The area's colorful history as a commercial and cultural center dates back some four centuries, actually predating Taipei itself. During the Imperial Chinese era of Taiwan, Twatutia, as it was then known, was an export hub for Taiwan's booming tea trade. All that caffeinated wealth stimulated an architectural boom in the area, and strings of elaborate red-brick townhouses from this era are immaculately preserved throughout the neighborhood.

Every good afternoon in Dadaocheng ends at PIER5, a trendy cluster of pop-up bars and food stalls operating out of converted shipping containers. Beer drinkers will appreciate the selection of local craft brews, and the container-top seating is a must at sunset. 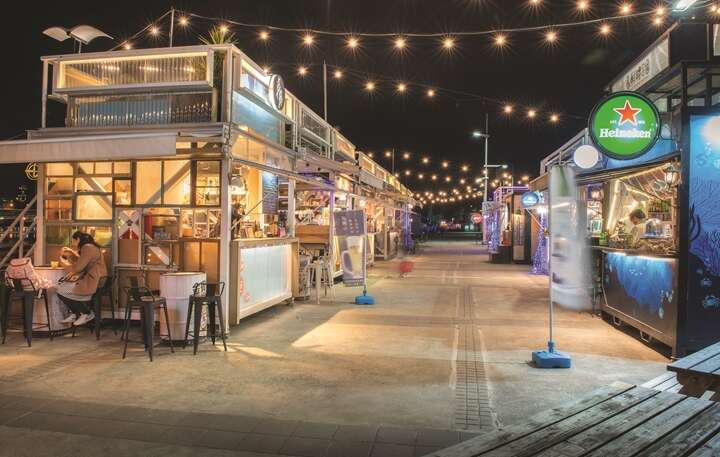 ▲Start your chill evening at the food stands made from shipping containers at Dadaocheng Wharf.

A slightly more elevated experience is dinner aboard the Great River Queen, an elegant Mississippi River paddleboat that runs regular sunset cruises. The cruises take people all the way to Guandu (關渡), which offers the most stunning sunset view of Guanyinshan (觀音山, Mt. Guanyin). ▲The riverside facilities at Guandu Wharf were recently reconstructed, making the surrounding area perfect for a relaxing walk.

Perched at the intersection of the Keelung and Tamsui Rivers, Guandu Wharf has a history that stretches deep into Taipei's past. Originally known as Kantou by the local indigenous people, the wharf prospered as a port during the Qing Dynasty (清朝, 1636 A.D. – 1912 A.D.), and was the main landing point for Chinese settlers arriving in northern Taiwan.

Guandu Wharf declined commercially during the last century, but was recently restored as a breezy green space, popular with runners and cyclists. The wharf itself is a charming enough place for its views of downtown Taipei, but it's Guandu Temple (關渡宮) that captures most people's attention.

Built in 1712, this ornate multi-level complex is one of Taiwan's most important shrines to the sea goddess Mazu (媽祖). If you're feeling adventurous, head for the orange storefront just outside the temple to try Guandu salted duck eggs, one of the area's most popular traditional snacks. ▲Standing at the estuary for more than 300 years, Guandu Temple continues to bless the region. (Photo/Ken Marshall)

To the south of Guandu Temple, roughly 57 hectares of protected wetland stretches out along the Keelung River, offering shelter to more than 230 bird species. Part of this patchwork of paddies, marshes, and wooded areas can be partly explored on foot at the Guandu Nature Park (關渡自然公園), or traced on the bicycle path that tracks south away from the wharf, passing mangroves and strings of tiny waterfront cafés.

Keelung River
The Keelung River slices horizontally across northern Taipei, marking the southern boundary of Neihu (內湖) and Shilin (士林) districts. It's perhaps best known as the location of the Taipei International Dragon Boat Championships (台北國際龍舟錦標賽), which tears along the waterway in late June.

For the rest of the year, the Keelung River is the city's peaceful backyard, with roller skating rinks, children's play areas, and the only official cricket pitch in Taiwan all found along its grassy banks.

Dajia Wharf 大佳碼頭
In late spring, Dajia Wharf buzzes with activities such as kayaking and dragon boat training as the nerve center of the upcoming summer events. Year round, the area is a great place to visit with kids, featuring adventure playgrounds and a geyser fountain that shoots jets of water 75 meters into the air. ▲Many people enjoy activities such as cycling, jogging or even water sports at Dajia Riverside Park.

Just south of the Dajia Riverside Park (大佳河濱公園) out Watergate No. 8, Airplane Alley backs onto the runway of Taipei Songshan Airport (台北松山機場), making for some great photo opportunities as aircraft take off and land.

To the west of the park, the Lin An Tai Historical House (林安泰古厝) is a lavish 19th-century mansion built in the Southern Fujian style, worth exploring for its large garden, moon doors, and idyllic lotus pond.

Meiti Wharf 美堤碼頭
Just up and across the river from Dajia, this is the main riverside area in Neihu District. Meiti Wharf is located just around the corner from the Miramar Ferris wheel, restaurants and shopping center, yet despite this, it is one of the most peaceful stretches along the Keelung River.

The riverside park is pretty expansive, with plenty of room for picnics, bike rides, and other outdoor activities, and boasts a view of Taipei 101. Down by the water, Cheers Aboard (碼頭乾杯) can arrange yacht rentals for private parties as well as riverside events at their trendy beach-themed venue. ▲With the Keelung River passing languidly by, Xikou Wharf and the surrounding area have developed and prospered.

Further upstream, Xikou Wharf is located near Rainbow Bridge (彩虹橋), a series of colorful structures that crisscross the river near Songshan Station (松山車站). "Xikou," which means "mouth of the stream," was in fact the name of the whole Songshan area during the Imperial Chinese era, which was also when the grand Songshan Ciyou Temple (松山慈祐宮) was first constructed. ▲Songshan Ciyou Temple and Raohe Night Market are vital parts of the local history of Songshan.

After exploring the temple, take some time to explore nearby Raohe Night Market (饒河夜市), which runs parallel to the wharf for a few hundred meters and is a must-visit for its lively late-night food scene and traditional souvenirs. 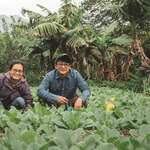 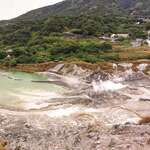 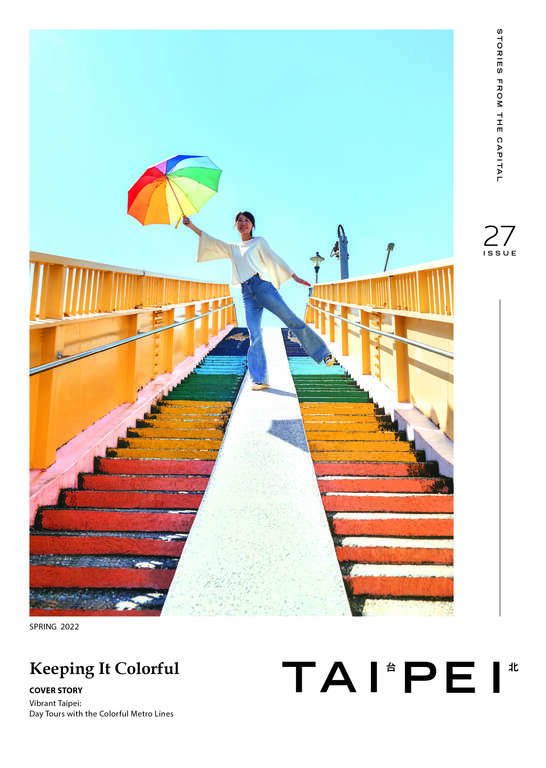